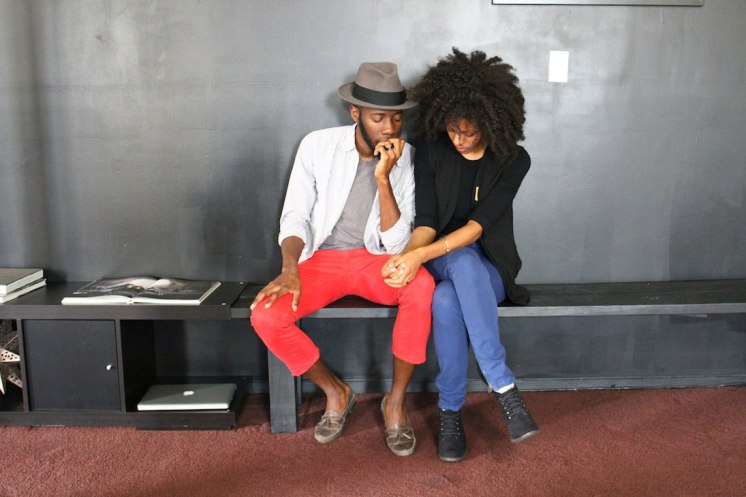 Oncer again, Style Like U puts up a great interview with a beautiful stylish pair. This love story is so cute…

“Our #sexualhealing month isn’t about favoring one perspective over another. That being said, in a culture where hooking up is almost perfunctory, we can’t help but be swept away with how Rog and Bee demonstrate that old fashioned commitment is just as badass and pioneering as 21st-century sexual liberation.

Theirs is a Tumblr love story – that’s what Bee, in her sugary American/Amish style, has named her romance with her husband and fellow photographer Rog. After meeting Bee at an Apple store event, Rog proposed on his knees and said, ”I saw you for the first time last year and now I know that I want to see you every day for the rest of my life.  Will you marry me?” He is a modern day Romeo through and through, who believes as much in the meaning of sticking to one person as he does in pursuing his artistic passions and to cutting off his crisp button downs or re-dying old-school tasseled loafers instead of throwing them out. Rog would make the most cynical among us melt all their notions that monogamous traditions, like a rewarding marriage, are obsolete

Realizing that being alone was preferable to filling her life with underwhelming, Girls-style boyfriends is what broke Bee free of what she came to see as the Sex and the City legacy of ridiculing sexually devoted relationships. Once the scare quotes around any idea of a committed, faithful relationship were dropped, Rog appeared. “I always thought I’d have to subversively get a traditional relationship, like live with someone for a long time, not get married, or not necessarily have this stable man in my life,” she recalls. Such resignation, though, proved, unnecessary. With Rog, Bee continues to find the sublime simplicity of her being. The two are focused on, as they say, baking bread, not the crumbs. As for her monastic-meets-preppie wardrobe, Bee declares:  ”I want to get to the cleanest, fundamental “flatline” of who I am and then meet people as a person rather than as a style or an image.”

The two complement each other in nearly everything, from colored jeans and fixations with details (like layering socks) to bringing their opposing artistic eyes together for photography projects, such as the book  Visual Insights: Outer Borough, which they shot, printed, and hand-bound themselves. They both owe their confidence that sharing a life together is where it’s at to their parents, who are all still married. “A lot of us have been paralyzed by too many options,” Bee laments. “Everything seems to be a transaction or a commodity, but at the end of the day I don’t think anybody realizes what’s being given up.” As Rog adds, “You can’t have it all and give nothing. Sexual experience has been extremely cheapened. It’s been demoted to a thrill. It’s not satisfying, it doesn’t last long — it’s a vapor. Intimacy is more than a thrill. There’s a thrill in it, because we have fun. But it’s a committed thrill, not an empty one.”  [See Source]